In the United States, homelessness increased significantly in the late 1970s and became an important political topic. The number of homeless people further grew in the 1980s, as housing and social service cuts increased and the economy deteriorated. The United States government determined that somewhere between 200,000 and 500,000 Americans were then homeless. The number of homeless is reported to have risen since that time.

According to the United States Conference of Mayors, the main cause is the lack of affordable housing.

The four following primary causes are: The minor causes cited by the mayors were:

Homelessness is an intractable problem without any widely implemented solution. Massive new funding was authorized by Congress in March 2009, but to this point, no improvements have occurred.

The State of Homelessness in America 2016 is the sixth in a series of reports charting progress in ending homelessness in the United States.

The major reasons and lack of causes for homelessness as documented by many reports and studies include:

According to the U.S. Conference of Mayors, the demand for emergency shelter in 270 U.S. cities increased 13% in 2001 and 25% in 2005. 22 percent of those requesting emergency shelter were turned away. Traditionally single men have constituted the majority of the homeless. In the 1980s there was a sharp rise in the number of homeless families in certain parts of the United States; notably New York City. Most homeless families consist of a single mother and children. A significant number of homeless people are teenagers and young adults, mostly runaways or street children. A 1960 survey by Temple University of Philadelphia’s poor neighborhoods found that 75% of the homeless were over 45 years old, and 87% were white. In 1986, 86% were under age 45, and 87% were minorities. 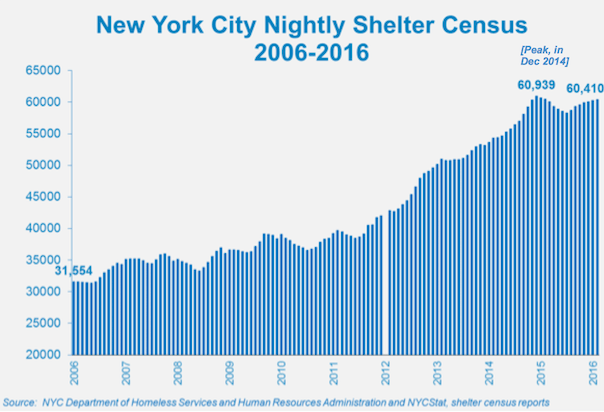 Data provided by Coalition for the Homeless If you see someone in need on the street or if you or your family need emergency shelter in New York City, you may dial 311 for assistance.

The following are excellent web resources that will allow you to Understand Homelessness.